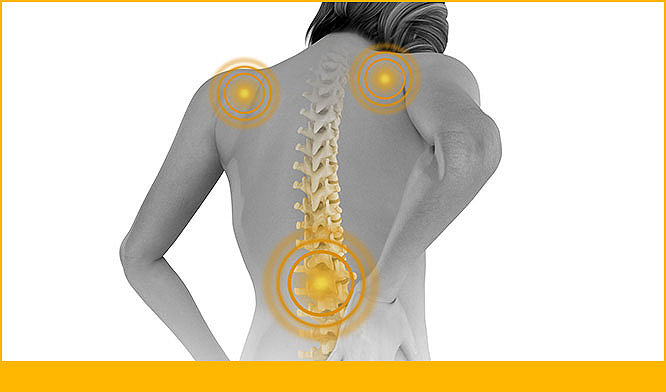 Now more than ever, we need to protect our healthcare staff. The tasks that caregivers must complete often puts their safety in jeopardy. In this section, you will find a variety of courses and resources to create awareness of the everyday patient care activities that pur caregivers at risk and educate our healthcare staff on nationally recognized standards for safe patient handling and mobility. 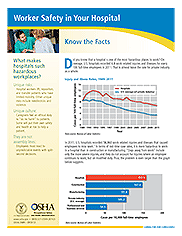 What makes hospitals such hazardous workplaces? 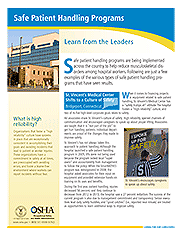 OSHA: Learn from the Leaders

Safe patient handling programs are being implemented across the country to help reduce musculoskeletal disorders among hospital workers.

Following are just a few examples of the various types of safe patient handling programs that have seen results. 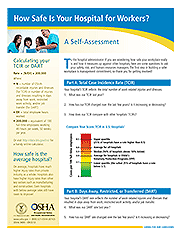 To the hospital administrator: If you are wondering how safe your workplace really is and how it measures up against other hospitals, here are some questions to ask your safety, risk, and human resources managers. The first step in building a safer workplace is management commitment, so thank you for getting involved! 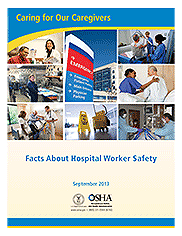 OSHA: Caring for Our Caregivers 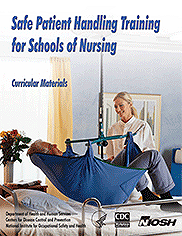 Curriculum developed in partnership with the National Institute for Occupational Safety and Health (NIOSH), the Veterans Health Administration (VHA), and the American Nurses Association (ANA). 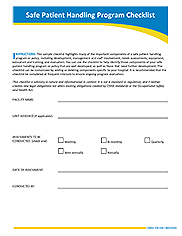 This sample checklist highlights many of the important components of a safe patient handling program or policy, including development, management and staff involvement, needs assessments, equipment, education and training, and evaluation. You can use the checklist to help identify those components of your safe patient handling program or policy that are well developed, as well as those that need further development. The checklist can be customized by adding or deleting components specific to your hospital. It is recommended that the checklist be completed at frequent intervals to ensure ongoing program evaluation.

This checklist is advisory in nature and informational in content. It is not a standard or regulation, and it neither creates new legal obligations nor alters existing obligations created by OSHA standards or the Occupational Safety and Health Act. 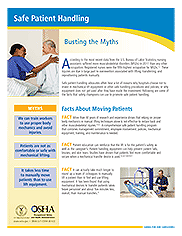 According to the most recent data from the U.S. Bureau of Labor Statistics, nursing assistants suffered more musculoskeletal disorders (MSDs) in 2011 than any other occupation. Registered nurses were the fifth-highest occupation for MSDs. These injuries are due in large part to overexertion associated with lifting, transferring, and repositioning patients manually.

Safe patient handling advocates often hear a lot of reasons why hospitals choose not to invest in mechanical lift equipment or other safe handling procedures and policies, or why equipment does not get used after they have made the investment. 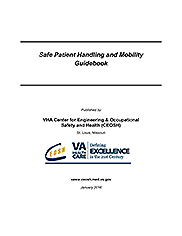 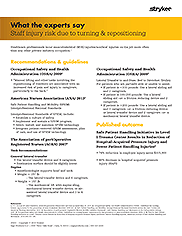 What the experts say: Staff injury risk due to turning & repositioning

Most PH equipment is inefficient to use and geared toward out-of-bed mobility. Injuries during in-bed PH are now recognized as a significant source of HCWI and PH equipment for in-bed mobility reduces risk. 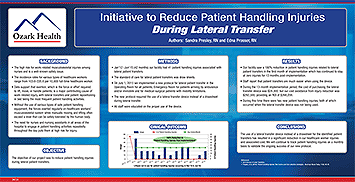 The high risk for work-related musculoskeletal injuries among nurses and is a well-known safety issue. The need for nurses and nursing assistants in all areas of the hospital to engage in patient handling activities repeatedly throughout the day puts them at high risk for injury.

The objective of the project was to reduce patient handling injuries during lateral patient transfers. 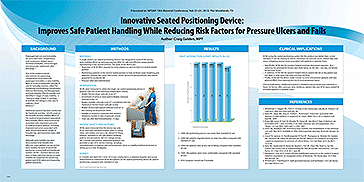 Specifically, HCWs felt the product helped minimize downward migration, thus reducing the potential for friction and shear forces on the skin – two key risk factors for pressure ulcers. In addition, HCWs felt the product helped reduce patient fall risk as the patient was less likely to slide down the chair and onto the floor. Finally, HCWs felt the device made it easier to move and position patients with less physical effort, thus reducing the risk of musculoskeletal injury. 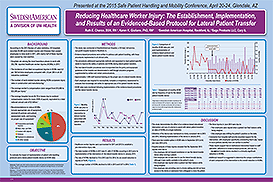 This study demonstrates the effect of an evidence-based educational intervention and use of a device to assist with lateral patient transfers on rates of HCWIs at a single institution.

Utilization of the device was maintained at a fairly consistent rate in 2013 and 2014, following implementation of the device in January 2013. There were two notable spikes in HCWI rates in September 2013 (n=4) and June 2014 (n=3).

Comments from hospital staff provide anecdotal support for the intervention, with employees commenting that it was “easier to move patients laterally from one surface to another.”

These results support that an institutional intervention based on staff education, adherence to evidence-based protocols, and use of a lateral patient transfer device resulted in a clinically reduction in HCWIs. 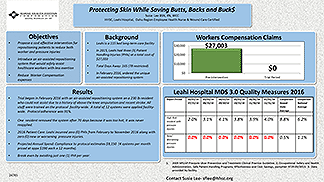 Objective to introduce an air-assisted repositioning system that would safely assist healthcare workers with less exertion. 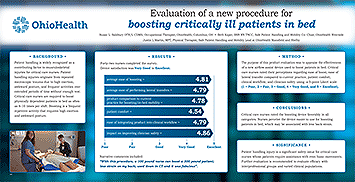 Critical care nurses are required to boost physically dependent patients in bed as often as 6-10 times per shift. Boosting is a frequent repetitive activity that requires high exertion and awkward posture. 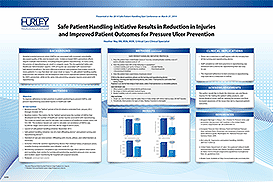 The goal of our project was to: 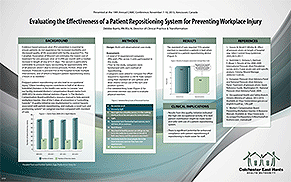 Evidence-based pressure ulcer (PU) prevention is essential to ensure patients do not experience the increased morbidity and decreased quality of life associated with facility-acquired PUs.

A quality initiative was implemented to control hazards associated with patient repositioning, and evaluate a novel turn and positioning system* on caregiver exertion compared with standard of care.