A synthetic bone graft substitute that has increased levels of bioactive glass compared to Vitoss BA, and has a unique porosity, structure, and chemistry to help drive 3-D regeneration of bone.

Vitoss BA2X contains increased levels of bioactive glass compared to Vitoss BA. In-vitro testing showed that it induced two times the deposition of calcium phosphate onto the surface of an implant while retaining the same handling properties.2

Bioactive glass contains three ionic constituents - silicon, sodium, and calcium. Upon implantation, these ionic constituents are released into the surround environment and react with bodily fluids.3-7 This reaction produced the deposition of a thin layer of physiologic calcium phosphate at its surface, favorable for osteoblast attachment.7 This is commonly referred to as a bioactive effect, and may lead to the bonding of new bone to the scaffold.5,8-13 In vitro testing showed cells exposed to Stryker’s proprietary formulation of bioactive glass demonstrated increased cell proliferation, increased collagen elaboration, and increased mineralization compared to cells cultured without exposure to bioactive glass.14

Note: In-vitro bioactivity testing has not been evaluated in human clinical trials. 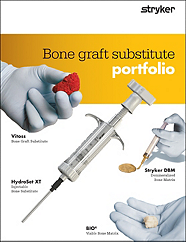 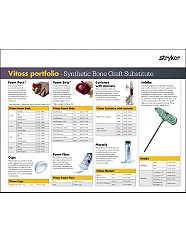