From concept to launch in 7 days: New Emergency Relief Bed

It started with a bed

As the numbers of novel coronavirus patients surge, news stories paint the picture of overflowing ICUs, patient beds filling up hallways and pop-up hospitals in tents. These and other colossal strains facing front-line responders in pandemic hotspots around the world weigh heavily on the minds of our teams who don’t have to read the news to know when our customers need help.

When Dr. Homer Stryker invented the Turning Frame bed in 1938, he was innovating to meet the needs of caregivers and patients from his first-hand perspective. He often told colleagues, “If your tools don’t work, make them work. If you can’t make them work, make some that do.” Last month, one of our teams did just that. Today, just like our beginnings, it started with a bed.

It was 11:30 p.m. on Friday, March 20 and Dean Birkmeier, Director of Advanced Operations at Stryker’s Medical division, was still working. “I knew that something had to be done. Hospitals urgently needed beds, and our existing products were designed to be customized, requiring time that hospitals just didn’t have,” said Dean. “I wanted to figure out how to design a new bed using readily available materials and processes that would allow the team to move at a speed never before attempted.”

So, he made a call and laid out the beginnings of his plan to a few members of our Medical division’s leadership team. Together, they marshaled a team of over 120 individuals from our Medical, Instruments and Joint Replacement divisions - to build a bed.

With ingenuity and collaboration, this team quickly designed the prototype, built a new supply chain, and integrated it vertically for regional manufacturing to meet the global demand.

In the U.S., the team began sourcing the largest commodity that was needed, steel, and soon realized that what they thought would be the most straightforward commodity to come by was one of the biggest challenges.

The project required enough steel to stretch from New York to Dallas while the entire U.S. economy was slowing down. Calling every steel mill and service center in the U.S. and Canada, the team eventually secured the material. And just two days after the bed design was finalized, the shipments began arriving. 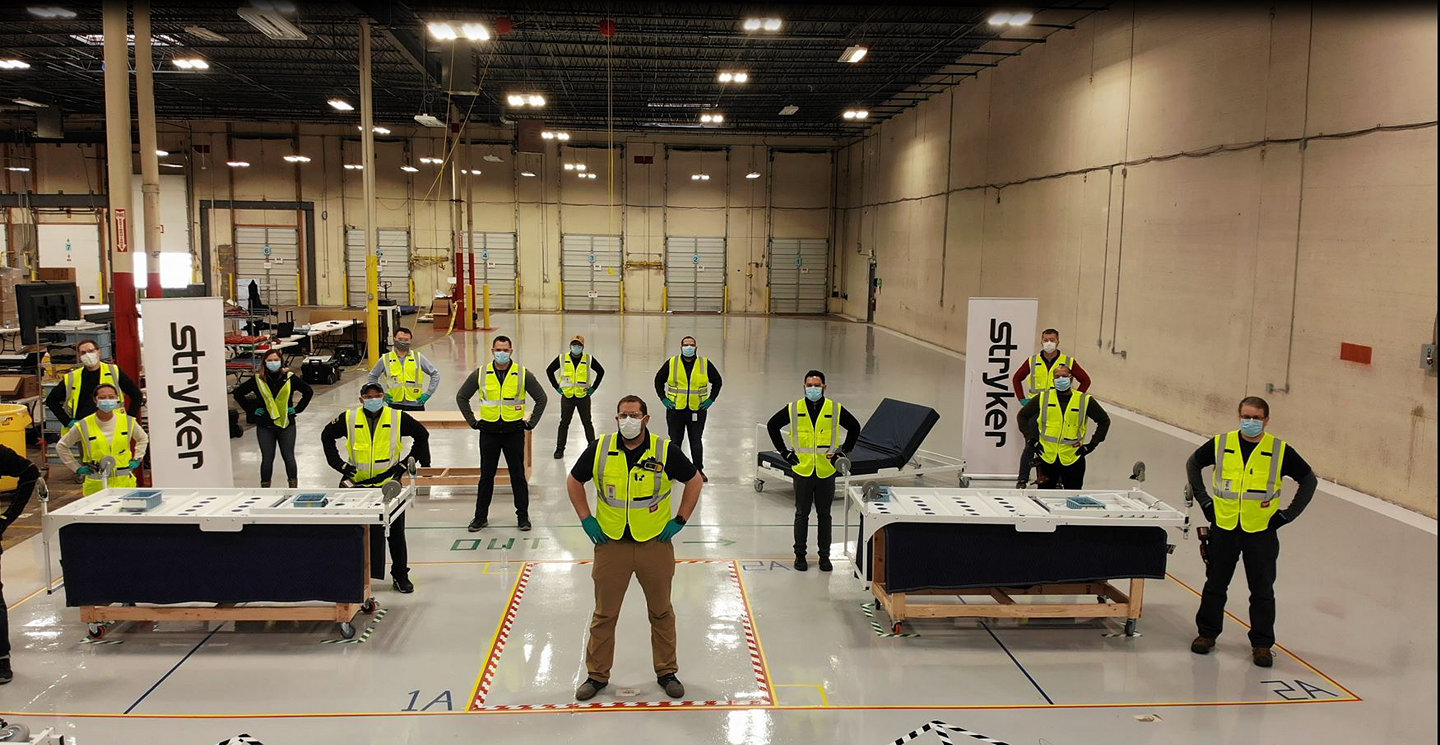 As the team moved closer to launch, everything from manufacturing to regulatory filings needed to be carefully orchestrated to run concurrently in an extremely truncated timeframe.

By March 27, the new beds were ready. In just seven days, an idea had become Stryker’s Emergency Relief Bed. A readily available solution intended to serve those on the front lines – ranging from hospital emergency departments and in-patient units to triage and pop-up sites of care which the team is actively pursuing making available in select markets around the world.

“We’re focused on meeting the supply needs of our customers so they can focus on taking care of their patients right now. Creating a limited-release bed that will help emergency responders and caregivers move and position patients efficiently is a small contribution in the shadows of their amazing work.” said Brad Saar, president of Stryker’s Medical division.

Homer Stryker’s legacy started with a bed and a commitment to innovation. Today that legacy is exemplified by the story of a team dedicated to making healthcare better for our customers, and seven short days, to make it happen.