On BattleBots, a Discovery Channel television series, individuals and teams build robots to combat in an arena elimination tournament. Each match consists of two robots competing for three minutes, where the goal is to destroy or disable the opponent. Teams come to compete from all over the world, one of which also works on Mako SmartRoboticsTM, Stryker’s solution for robotic-arm assisted joint replacement.

The team’s leader is Victor Soto, a senior staff systems engineer based in Fort Lauderdale, FL. He’s been building robots since college, and when BattleBots invited Victor to the show in 2016, he asked a few people from the Mako team if they wanted to compete. They did.

After a few years of competition, Victor has made a name for himself, and so has his team, which is sponsored by Stryker. We asked Victor what the experience has been like. Here’s what he said.

What has the BattleBots competition been like over the years?

We started in 2016 and lost right away. There wasn’t a 2017 season, but 2018 was our breakout year. We won a lot of fights and made it to the single elimination tournament round. In 2019 we went back with some major upgrades and had some really good fights. For 2020, the season airing now, we made even more upgrades—and it’s going to be a great season.

In 2016, we started calling ourselves “Team Revolution” because our robot is named Rotator.

How does Stryker support you?

Stryker is our team’s official sponsor, which allows us to get materials for the robot. We also get help from machinists, when they’re available. And I have to mention the cool logos created by Juan Querubin and the hotrod gold paint job done by our VP, Shawn Kroll.

I hand-picked people based on their backgrounds – like electrical or mechanical engineering – and we get together on certain days to strategize how we’re going to attack the build plan. We treat it like a mini project where we have a pre-determined number of months to finish.

How does this all intersect with your work on Mako SmartRoboticsTM?

We have a lot of talented engineers in our Florida office because we work on robotics on a day-to-day basis. Most of the BattleBot components are off the shelf—simple parts. But sometimes we don’t like the way they perform so one of the engineers will modify something to make it behave differently. We use a lot of the same engineering principles we use with Mako to strengthen Rotator.

What has the experience meant to you?

It’s been fantastic. We aren’t just working on a hobby. We’re bringing awareness of Stryker to the world, and also inspiring the new generation of engineers.

Is inspiring the next generation something you take pride in?

Of course. We receive fan mail, emails and photos from kids, or we’ll get messages from parents about their child wanting to be an engineer and asking us questions about how to get into the field. That’s the really cool thing. 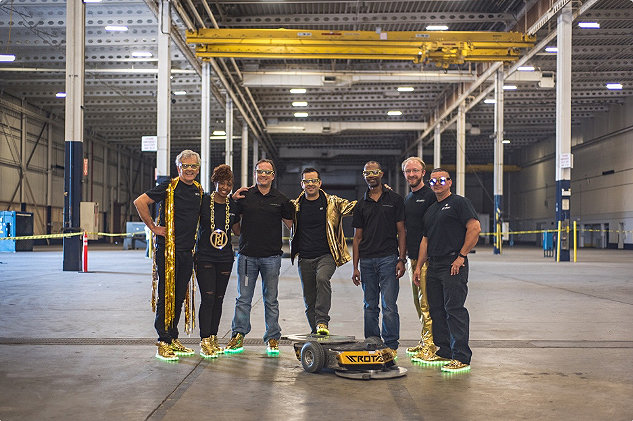 Want to see Rotator in action?
Watch BattleBots on the Discovery channel to see how the 2020 competition turns out.