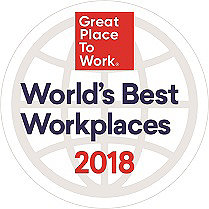 For the second year in a row, FORTUNE and Great Place to Work (GPTW) named Stryker one of the World’s Best Workplaces. The company ranks #12 out of 25 companies.

To be eligible for the list, a company must meet GPTW’s definition of a multinational company and appear on a minimum of five national Best Workplaces lists, which Great Place to Work compiles based on the results of a Trust Index employee survey and Culture Audit.

This is the second year we appeared on this list, which is the result of receiving GPTW recognition in Australia, Brazil, Canada, France, Greater China, Japan, Mexico, the Netherlands, Spain, and the United States.

To learn more about the World’s Best Workplaces list, check out FORTUNE.