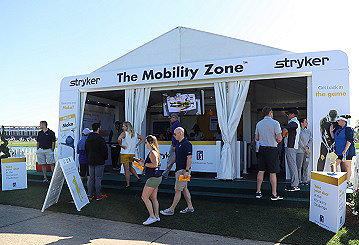 Stryker, the Official Joint Replacement Products of the PGA TOUR® and PGA TOUR Champions, brings The Mobility Zone® to its fourth tournament of 2018

Stryker Orthopaedics announced today plans to activate on-site at The AT&T Byron Nelson in Dallas, Texas. This tournament marks the fourth of the year where Stryker will engage with golf fans at The Mobility Zone – a destination designed to educate tournament-goers about the importance of joint health and Mako Robotic-Arm Assisted Surgery. In addition, on Thursday of the tournament, Stryker will make its sixth K9s For Warriors donation of 2018 with a ceremony at the Patriots' Outpost, continuing its relationship with the organization which began in 2015.

During the ceremony, Air Force veteran LaWanna Viers will share her experiences following a trying deployment to Iraqin 2009 and the path that led her to Corey, her service canine. Viers, with Corey, will also have a unique experience at the tournament as an Honorary Observer, an opportunity provided to select individuals at tournaments to walk inside the ropes with a pairing to get an up-close experience with play. This will be the first time at any PGA TOUR tournament that an Honorary Observer has walked inside the ropes with a service canine.

The ceremony will take place on Thursday, May 17 at 11 a.m. and Viers' Honorary Observer experience will kick off following the ceremony. K9s For Warriors is a nonprofit organization dedicated to providing service canines to military veterans suffering from Post-Traumatic Stress Disability, traumatic brain injury or other military trauma as a result of military service post 9/11.

Fans at the tournament can also stop by The Mobility Zone to support the cause by purchasing the same hat that PGA TOUR professional, and longtime brand ambassador, Fred Funk wears on TOUR. With each purchase, Stryker will make a donation to the K9s For Warriors organization.

"We are thrilled to sponsor our 6th service canine of 2018 at The AT&T Byron Nelson," said Stuart Simpson, President, Stryker's Joint Replacement Division. "K9s For Warriors has changed so many lives and we are proud to extend our mission of making healthcare better through this fantastic organization."

As the premiere feature of The Mobility Zone, the new Accuracy Challenge will invite visitors to take a shot at surgery with a hands-on experience introducing Art H. Ritis, a life-size model that aims to provide tournament-goers a basic understanding of joint replacement surgery and Stryker's Mako Technology. The revamped Mobility Zone allows visitors to speak with local surgeons to further understand potential treatment options for joint pain.

Lastly, tournament goers will also see Stryker throughout the course with its 1.8-mile Health Walk, featuring interactive signs designed to educate fans about joint health and challenge them with golf trivia.

For additional information on the Stryker Accuracy Challenge as well as K9s For Warriors involvement, please visit: www.patients.stryker.com.

About Stryker
Stryker is one of the world's leading medical technology companies and, together with its customers, is driven to make healthcare better. The company offers innovative products and services in Orthopaedics, Medical and Surgical, and Neurotechnology and Spine that help improve patient and hospital outcomes. More information is available at www.stryker.com.

The PGA TOUR co-sanctions more than 130 tournaments on the PGA TOUR, PGA TOUR Champions, Web.com Tour, PGA TOUR Latinoamérica, Mackenzie Tour-PGA TOUR Canada and PGA TOUR-China. Members on the PGA TOUR represent the world's best players, hailing from 25 countries (84 members are from outside the United States). Worldwide, PGA TOUR tournaments are broadcast to more than 1 billion households in 226 countries and territories in 23 languages. Virtually all tournaments are organized as non-profit organizations to maximize charitable giving. In 2017, tournaments across all Tours generated a record of more than $180 million for local and national charitable organizations, bringing the all-time total to $2.65 billion.