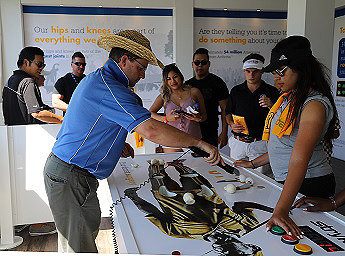 Stryker, the Official Joint Replacement Products of the PGA TOUR® and PGA TOUR Champions, brings The Mobility Zone® to its fifth tournament of 2018

Stryker Orthopaedics announced today plans to activate on-site at Travelers Championship in Cromwell, Connecticut. Stryker returns to the tournament for its second consecutive year to bring joint health education to golf fans. Additionally, Stryker will demonstrate its commitment to military veterans with its seventh K9s For Warriors donation of 2018 during a ceremony in the Patriots Outpost.

Extending its mission to make healthcare better, Stryker is proud to continue its relationship with K9s For Warriors, which began in 2015. Jay Ceatano, former Marine and current Army National Guard soldier, will be at the ceremony to explain how his service dog, Belfair, and the K9s For Warriors program changed his life. Following the ceremony, Ceatano, along with Belfair, will walk inside the ropes with professional golfers as Honorary Observers. This will be the first time a service dog has walked inside the ropes at the Travelers Championship.

At Stryker's Mobility Zone, fans can support veterans as well by purchasing the same hat that PGA TOUR professional and longtime brand ambassador Fred Funk wears on TOUR. With each purchase, Stryker will make a donation to K9s For Warriors to support training and placement of service dogs with military veterans.

"Stryker is very proud to demonstrate its mission so strongly at the Travelers Championship," said Stuart Simpson, President, Stryker's Joint Replacement Division. "Giving our support to those who served and educating fans about joint health are great examples of making healthcare better."

To provide fans an interactive and educational experience, The Mobility Zone will feature The Accuracy Challenge – a life-size model named Art H. Ritis designed to provide tournament-goers a basic understanding of joint replacement and Stryker's Mako Technology. Additionally, fans will have the opportunity to speak with local surgeons about potential treatment options for joint pain and about the Mako Technology, the game-changing technology in joint replacement from Stryker.

Lastly, tournament goers will also see Stryker throughout the course with its 1.25-mile Health Walk, featuring interactive signs designed to educate fans about joint health and challenge them with golf trivia.

For additional information on the Stryker Accuracy Challenge as well as K9s For Warriors involvement, please visit: www.patients.stryker.com.

Stryker is one of the world's leading medical technology companies and, together with its customers, is driven to make healthcare better. The company offers innovative products and services in Orthopaedics, Medical and Surgical, and Neurotechnology and Spine that help improve patient and hospital outcomes. More information is available at www.stryker.com.

The PGA TOUR co-sanctions more than 130 tournaments on the PGA TOUR, PGA TOUR Champions, Web.com Tour, PGA TOUR Latinoamérica, Mackenzie Tour-PGA TOUR Canada and PGA TOUR-China. Members on the PGA TOUR represent the world's best players, hailing from 25 countries (84 members are from outside the United States). Worldwide, PGA TOUR tournaments are broadcast to more than 1 billion households in 226 countries and territories in 23 languages. Virtually all tournaments are organized as non-profit organizations to maximize charitable giving. In 2017, tournaments across all Tours generated a record of more than $180 million for local and national charitable organizations, bringing the all-time total to $2.65 billion.