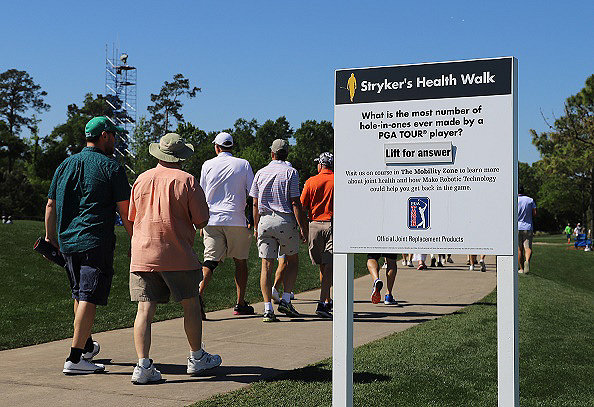 Today, Stryker announced its activation at THE NORTHERN TRUST in Paramus, New Jersey, at The Ridgewood Country Club. At its seventh PGA TOUR tournament of 2018, Stryker is reinforcing its commitment to educating golf fans about joint health. Additionally, on Thursday during a military appreciation ceremony in the Patriots' Outpost, Stryker's Chairman and CEO, Kevin Lobo, will present a donation to K9s For Warriors to sponsor Stryker's 20th service dog with the organization, giving a veteran and a dog a new leash on life.

At The Mobility Zone® fans will gain a greater understanding of joint replacement surgery and Stryker's Mako Technology through the Accuracy Challenge. Featuring a life-size model named Art H. Ritis, tournament-goers who step up to the challenge will attempt to remove replica arthritic bones and replace them with Stryker's hip and knee implants. In addition, local orthopaedic surgeons will be on-site to speak with fans about joint health and potential treatment options, including Mako Robotic-Arm Assisted Surgery.

"With THE NORTHERN TRUST minutes from our headquarters, we're thrilled to bring The Mobility Zone to our backyard here in New Jersey," said Stuart Simpson, President, Stryker's Joint Replacement Division. "Mako Robotic-Arm Assisted Surgery is changing the game for orthopaedic surgery and we are excited to showcase it as we continue to educate golf fans about joint health and potential treatment options."

During the military appreciation ceremony on Thursday at 11 a.m., Stryker will sponsor its 20th service dog for a military veteran suffering from Post-Traumatic Stress Disability, traumatic brain injury or other military trauma as a result of military service post 9/11.

Army veteran David Castro, a graduate of the K9s For Warriors program, will be at the ceremony to talk about the impact his service dog, Hunter, has made in his life.

Fans at the tournament can also stop by The Mobility Zone to support the cause by purchasing the same hat that PGA TOUR professional, and longtime brand ambassador, Fred Funk wears. With each purchase, Stryker will make a donation to the K9s For Warriors organization.

For additional information on the Stryker Accuracy Challenge as well as K9s For Warriors involvement, please visit: patients.stryker.com.

Stryker is one of the world's leading medical technology companies and, together with its customers, is driven to make healthcare better. The company offers innovative products and services in Orthopaedics, Medical and Surgical, and Neurotechnology and Spine that help improve patient and hospital outcomes. More information is available at stryker.com.

The PGA TOUR co-sanctions more than 130 tournaments on the PGA TOUR, PGA TOUR Champions, Web.com Tour, PGA TOUR Latinoamérica, Mackenzie Tour-PGA TOUR Canada and PGA TOUR Series-China. Members on the PGA TOUR represent the world's best players, hailing from 27 countries (88 members are from outside the United States). Worldwide, PGA TOUR tournaments are broadcast to more than 1 billion households in 226 countries and territories in 23 languages. Virtually all tournaments are organized as non-profit organizations to maximize charitable giving. In 2017, tournaments across all Tours generated a record of more than $180 million for local and national charitable organizations, bringing the all-time total to $2.65 billion.