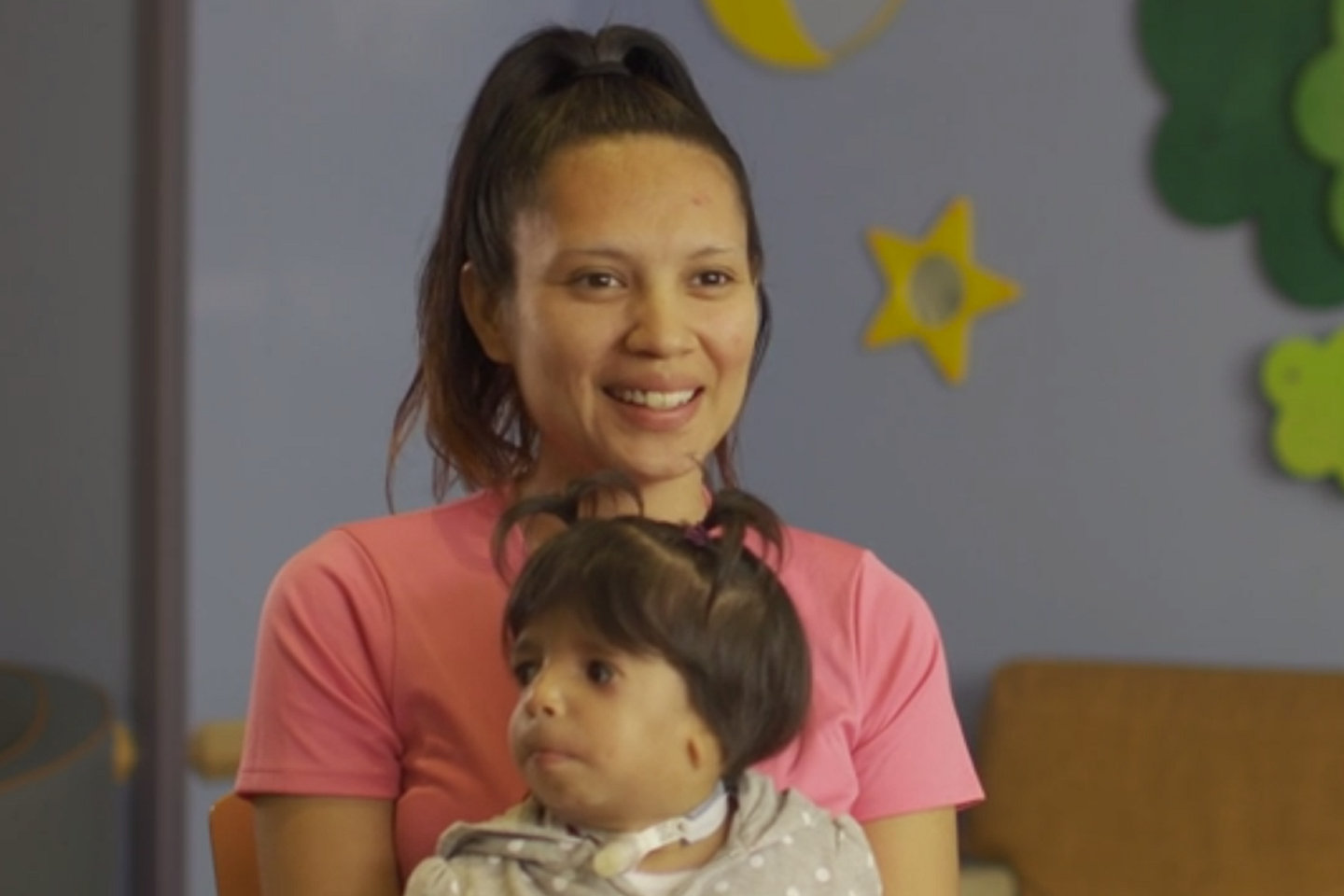 Olivia is three, an age every parent knows well, a time when toddlers begin to ask questions and become more aware of the world around them. Three-year-olds are often learning to count, taking turns, making friends and starting preschool, but Olivia hasn’t had the same life.

Olivia is living with Treacher Collins syndrome, a very rare condition that afflicts an estimated one in 50,000 people globally each year. It typically affects the development of bones and other tissues of the face. Some people with this condition are also born with an opening in the roof of the mouth called a cleft palate. In severe cases, under-development of the facial bones may restrict an affected infant’s airway, causing potentially life-threatening respiratory problems. This is the case with Olivia, who was given the tracheostomy as a life-saving measure shortly after birth.

Olivia has also faced other challenges. Early on, she had trouble eating and her physical and cognitive abilities have slowed because of it. "She would come out of hospital for a week and then go back for three months”, says Vanessa. For a time, Olivia was passed around from doctor to doctor, suffering from a lack of resources in her hometown of Juarez, Mexico, to support her rare condition.

A sense of humour and humility are the qualities used to describe Dr. Vernon Burke by those who know him. His personable nature lends to his success in working with children and, in particular, those afflicted with craniofacial and cleft anomalies.

He’s no stranger to complex craniofacial deformities, performing, on average, 450 surgeries per year with a focus on bony work for cleft and craniofacial surgery and orthognathic surgery. It is this expertise, and the proximity and connection to Juarez, that led to his eventful meeting with Olivia. 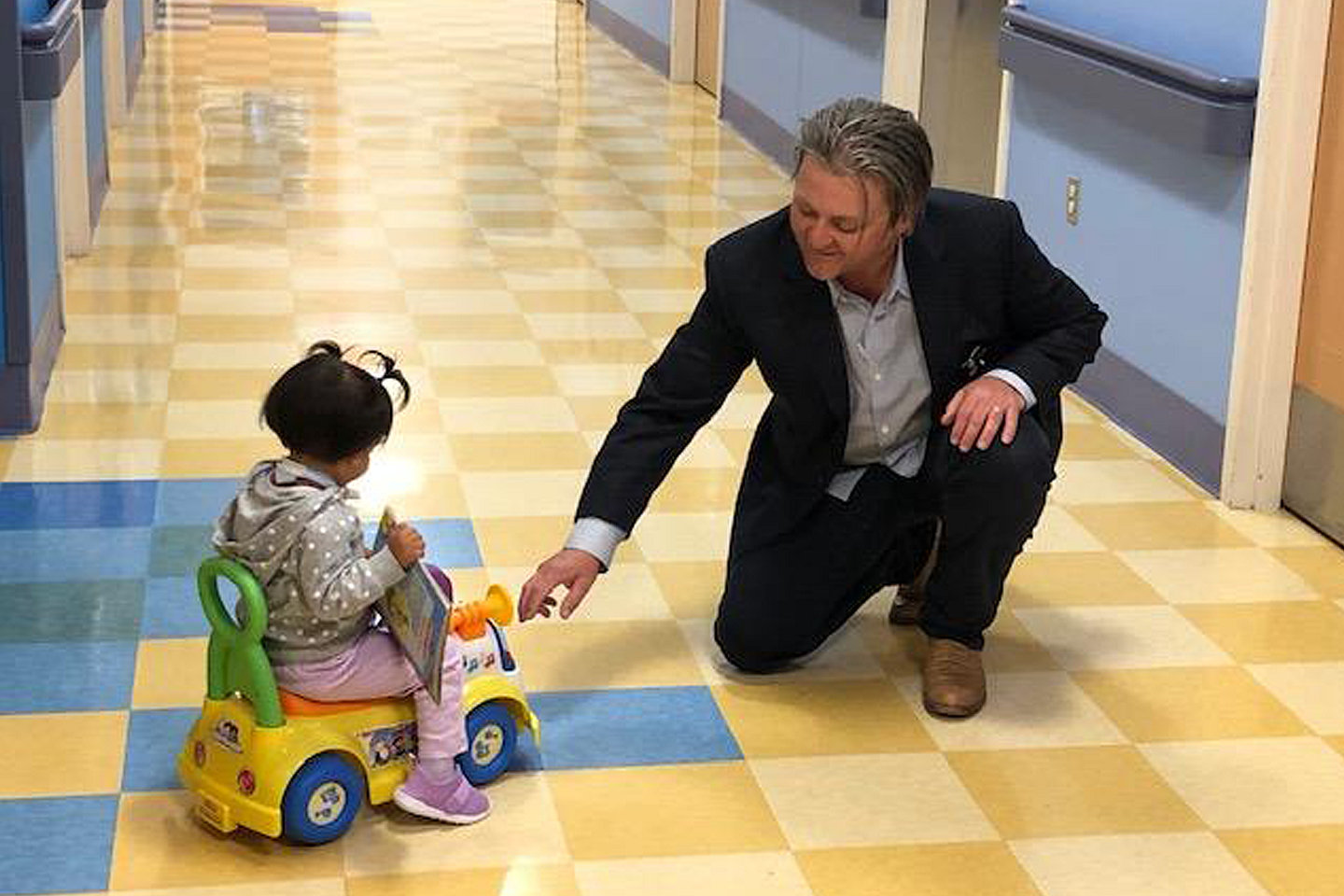 Before the first appointment, Olivia was becoming ill several times per year and wasn’t eating well. On top of that, she was living with a one in ten risk of death each year that she had the tracheostomy tube.

Dr. Burke’s immediate goal in the first six to eight months of treatment was to open her airways via a distraction procedure and subsequently remove the distractors, with the end goal to remove the tracheostomy. The procedure was complex and Vanessa was not supported by health insurance, so Dr. Burke formulated a plan to garner support needed for her procedure.

With a plan in place, it was time for Olivia’s distraction surgery. Olivia began with an ENT that ensured her airway was stable, then another surgeon placed a feeding tube for nourishment during the weeks post-op. Next, Dr. Burke began the distraction using Stryker’s Pediatric Mandibular Distractor (PMD) with anti-reverse mechanism, a tool intended to help elongate her lower jaw and open up her airways by fixating the linear distractor to Olivia’s mandible and slowly turning it half a millimetre to a millimetre daily. Similar to palate expanders used in orthodontics, a small end of the distractor is accessible by the parent, who uses a special screwdriver at a specified time to make the exact measured turns. Dr. Burke was one of the first surgeons to use the new distraction device and Olivia’s surgery was a success. After a few weeks with the distractors in place, Olivia returned for their removal as well as the removal of the gastric (feeding) tube.

Dr. Burke says Olivia is like a new girl after the distraction and that she’s “able to eat much better now that her jaw is in a better position. It opened up her throat and airways, so she can breathe better and eat independently. Her teeth meet better so she can better bite into things”. After years of waiting, Olivia and her family are seeing changes and outcomes that they never expected. Her mum, Vanessa, says, “Well for us it’s a lot because we’ve been waiting three years for a surgery like this and we had previously received an answer that no, she wouldn’t be able to get it and that she was going to remain like this”.